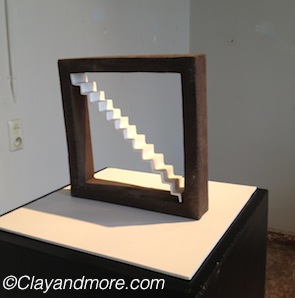 As you could read in my last blog post,

I’m participating in ‘Architec-Tour 2013′: a Flemish art project about the relationship between clay and architecture.  Time to show my work!

The staircase as architectural element

I was inspired by the staircase as architectural element. Being as old as the hills, I was intrigued by the different roles it got throughout history:The staircase was not only a functional element, but soon got a religious role. Just think of the sometimes endless staircases at the entrance of churches or temples. In addition, the staircase was often a status symbol, like the grand staircases that dominate many Baroque palaces. Finally, staircases also have an aesthetic role.

These four roles form the foundation for my series, called ‘Getrapt‘. Each work starts from the same white porcelain staircase, stripped to the core, and interprets one or more roles.

The first piece of work from the series ‘Getrapt‘, is called ‘Ingekaderd‘ (Framed). In essence, it’s a homage to the staircase. The black frame emphasizes and amplifies the simplicity and aesthetic value of the staircase. In contrast, the frame deprives the stairs of its functional aspect by pulling it out of its context.